Buffer Festival is an annual showcase of YouTube video premieres, bringing the most acclaimed digital creators and their audiences together. — BufferFestival.com 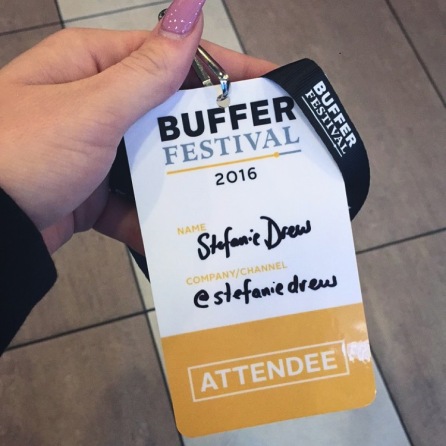 This past weekend I went to the 4th annual Buffer Festival here in Toronto. It was my second BufferFest (last year being my first), and I am yet again left inspired by the YouTube world. For those of you who have been following my blog up until now, this post is a bit of a different one. Don’t worry, I’ll share a few outfits from the weekend! But this time around it’s about more than just the fashion.

Essentially, Buffer Festival is a film festival for YouTubers; attendees go to premieres and panels and red carpet events for some of their favourite YouTube personalities . While I did not attend the entire event, there were a few of the events I made sure I didn’t miss!

I was terrible at getting photos this weekend, but I remembered to snap my gala makeup look before bed!

Friday Night: The Gala Award Show was a perfect night out! YouTubers walked the red carpet to kick off the weekend and the show was full of some of the favourite premiere videos submitted to the festival. What I loved most was the diversity of videos shown. Without giving a play by play, there were a few that stood out to me, but they are yet to be live on YouTube yet. I’ll be sure to include links to some of my faves as soon as they are uploaded by their creators.

Saturday: I attended the Vlogumentary premiere. I’ve been looking forward to it’s release since my friend Corey Vidal started talking about this new project he was part of (along with Shay Carl, Morgan Spurlock, and many others), a documentary on YouTubers. Yesterday was the day and I must say, I loved it. It was great insight on some of YouTube’s first vloggers and the phenomenon as a whole. I made my first YouTube video in 2007 (no it’s not currently public lol.. perhaps one day it’ll come out of the vault), and though I didn’t post or vlog consistently, I avidly followed the lives of many that did. You feel a sense of connection to complete strangers who share some aspect of their lives on the internet, and it feels more personal than just a tweet or instagram post. It’s more than just posting a video to the internet. It’s a lifestyle and a community, which this film portrayed very well.

Most of what I currently post on YouTube (quite sporadically), and what I used to post all the time (60+ videos from 2007-2012), are music related, covers and less than a handful of originals. So I was especially excited for the Saturday night concert presented by MUCH, and to see a few of my favourite YouTube musicians take the stage. The show was hosted by Tyrone and Alayna Fender and opened with an unreal a capella performance by Mike Tompkins. The whole show was so rad, but a huge shoutout to a few of my faves Meghan Tonjes, and Andrew Huang.

I wasn’t able to enjoy any of the festival yesterday, but I heard only great things from those that did. My only regret from the entire weekend though, was not getting the chance to talk to Jenna Marbles. Maybe next time!

Both years I’ve gone, I’ve felt like I should get back into my YouTube groove so perhaps sometime soon I’ll work on putting out more material. I’d like to incorporate a little bit of everything into my channel so we’ll see where it goes! I should find some tall YouTubers though! If anyone knows of any, send them my way. I’d love to be friends (always) haha.

One thought on “BufferFestival 2o16”

This might not look like much but at just over 3 weeks postpartum this feels like an accomplishment!
Not gonna lie, my newest bag from @mzwallacenyc is going to be a great alternative for when I don’t want to pack a full diaper bag!
Three weeks of being a mama under my belt 🎉 Still getting used to our non-schedule schedule, and it’s hard to get much done when this little one is attached to me 98% of the time, but hoping to tackle getting up and out of the house more often even if it’s just for a hot girl coffee walk.
I took advantage of one of the @fashionnova BOGO Free sales and got 4 pairs of pants for the price of 2!! My biggest point of advice is to always check the inseam length in the product description. Some ‘tall’ options will be way too short!
FYI: The BOGO FREE sale ends tonight.I’m wearing the “Tall Give Me A Break Cargo Carpenter Jeans” in a size 9. I’m typically a US6 and most comfortably fit @fashionnova size 7, but wanted a baggier fit and have no actual idea what size my current post baby bod is.. Any questions, let me know below!!
A couple of cozy gals.